Board Games > Ancient > Omen: Fires in the East

Omen: Fires in the East 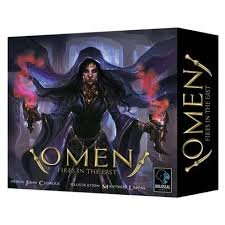 The cities of Persia and Phoenician are rich lands of wealth, culture, and beauty. But they are not free from war and conflict. As ancient rivalries flare, mythical sphinxes and cunning merchants will join skilled soldiers and oracles to tip the scales to one side of the conflict, or the other.

Omen: Fires in the East is a stand-alone head-to-head card game in the Omen Saga collection of games. You will manage your economy and hand of unit cards each turn as you tactically play units to cities or for their unique abilities. Plan your strategy to take advantage of the combined strength of your units to win war-torn city reward tiles, utilize their abilities, and defeat your opponent. Gain the most victory points at the end of the game to rule over these lands!

Features
- Head to Head demigod battles for supremacy of ancient Persia.
- Tactical battle card-game where every unit has its own unique ability.
- Fully compatible with any other game in the Omen Saga.