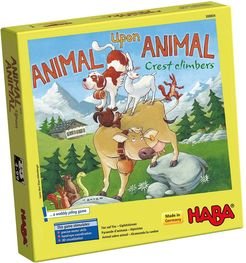 Animal Upon Animal: Crest Climbers uses the same basic gameplay as Animal Upon Animal: Each turn a player rolls the die and either places one or two animals on to the stack of animals, passes one of their animals to another player for them to place, or places an animal on the table, extending the base for other players to build upon. Of course, if any pieces fall off whilst you are building, you get up to two of them back. The first player to have used all of their animals wins.