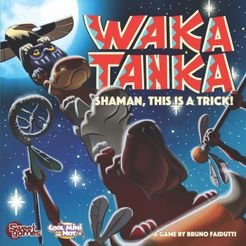 In Stock
Waka Tanka is a very light bluffing card game in the Bullshit family. Players are Native American shamans who want to impress the tribe by conjuring various animal spirits and having long discussions with them. The problem is that the shaman doesn't always remember the right incantation and somewhat calls the wrong spirit ? hoping no one will notice.

Each player in turn plays an incantation card face down in front of an animal totem. Other players can call the bluff if they think it's not the right animal. A player can also try a full ceremony if he thinks enough incantations have been made to a given animal spirit. A player wins by getting rid of all their incantation cards or fulfilling two ceremonies.