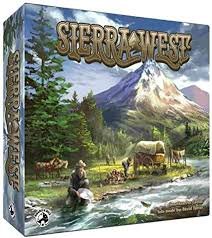 In the late 1840s, thousands of pioneers headed out West to seek wealth and opportunity. Many of these brave souls traveled by wagon over the Sierra Nevada mountain range, into what would soon become the Golden State of California. In the game Sierra West, you are an expedition leader who must guide a party of rough-and-ready pioneers—employing a clever mix of strategy and tactics with each step.

Sierra West comes with four sets of special cards and parts, each of which can be combined with the game's basic components to create a unique mode of play. During setup, the players choose a mode, then build a mountain of overlapping cards with the corresponding deck. Each mode adds new thematic content, alternate paths to victory, and interesting twists on the core mechanics.

The four included modules are:

Overview of Play
At the start of each turn, you will overlap and arrange three cards into your player board—exposing and concealing a selection of the action icons available on them. This will create two unique paths for your pioneers to follow. Next, you will move your pioneers across their paths from left to right, performing a series of small actions. Common actions include: claiming cards from the mountain, building cabins, gaining resources, and advancing your wagon. Additional actions are brought into the game by the chosen mode—such as: harvesting apples, mining for gold, fishing, and fighting outlaws. As your pioneers complete their paths, they will gain access to the action spaces on the upper portions of your cards. On these, you will be able to exchange resources for to advance on the wagon trail and homestead tracks, or activate other special abilities unique to the mode.

As the game continues—and more cards are removed from the mountain—new and exciting things are discovered! Each piece of the mountain is either a card that can be gained to improve your deck, or a special card that is added to a face-up row at the mountain’s base. As this row extends, more of the mode’s opportunities and challenges come into play. For example, in Boats & Banjos mode, the row is a river that offers more fishing and gold panning options as time goes on.

Sierra West can be set up and played in under an hour, often leaving people with the desire to play it again right away—especially to explore the other modes! It is a highly thematic Eurogame that offers a truly novel and satisfying spin on action-programming, worker-placement, and deck-building.

—Description from the publisher