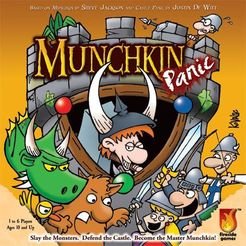 In this hybrid game, the Munchkin monsters have found the Castle Panic towers and are on the rampage! Players need to combine cards to hit and slay the monsters before they destroy the castle. The card combos available in Munchkin Panic are created from a unique mixing of the decks of the two source games. Each defeated monster becomes a trophy and gives up its treasure to the victor. If players work together to defeat the monsters, the player with the highest point count becomes Master Munchkin — but players must balance their self-interest with the cooperation necessary to survive. If players get too greedy, the monsters will stomp the castle flat while the players are too busy fighting amongst themselves!