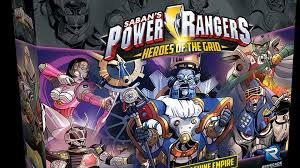 The Royal House of Gadgetry has arrived to conquer Earth! With all of their mechanical might, the Machine King and his coterie prepare for battle. The Power Rangers' skills will be put to the test as they deal with the machinations of this catastrophic clockwork court.

Meet the Machine Empire! The devious Prince Gasket, the heir to the throne, is joined by the enchanting Princess Archerina, while the egotistical Louie Kaboom plots their downfall. Big Bad General Venjix leads the empire's forces, and King Mondo himself rules with an iron fist and his terrifying Sword of Damocles.

This expansion introduces the concept of paired monsters. Are you brave enough to face Prince Gasket and Princess Archerina together as a deadly double act?