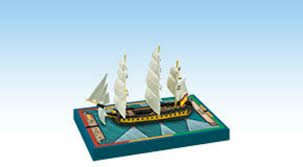 The Mahonesa class was a class of Spanish 5th-rate frigates, armed with 34 cannons and part of the "Armada Real". Often considered the best frigates in the Spanish Navy, they had a designed crew of around 280, and were armed with 26 12-Pounder guns in the lower deck and 8 6-Pounder guns in the upperdeck. The Diana was one of the six Mahonesas-class frigates built at the Mahon shipyard in Minorca, based on French and British construction techniques and improving upon them - She was the fastest ship of her class. It participated in the evacuation of the Spanish forces at the Siege of Roses during the French Revolutionary Wars. On 13 October 1796, she was captured after an action against HMS Terpsichore at the Strait of Gibraltar, nearby Cape Gata.

The ship base, ship card and ship log are printed on two sides - the game data of a second ship is printed on the back. This ship pack can also be used to represent the Spanish Mahonesa class frigate "Proserpina 1797".