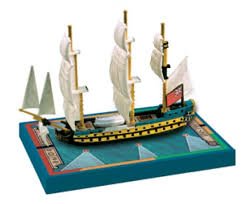 In Stock
After being captured off the coast of Spain by Lord Robert Manners, the Protee was commissioned in the Royal Navy as the third rate HMS Prothee. She was converted to serve as a prison ship in 1799, and broken up in 1815. Eight of her small cannons were purchased by John Manners, 5th Duke of Rutland and are currently at Belvoir Castle, Leicestershire. The cannons are still fired on special occasions, such as weddings and the Duke's birthday. The ship base, ship card and ship log are printed on two sides–the game data of a second ship is printed on the back. This ship pack can also be used to represent the British Caton Class ship-of-the-line "HMS Argonaut 1782."