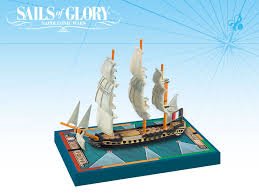 In Stock
The Hb class was a class of six 40-gun frigates of the French Navy, designed in 1781 by Jacques-Nol San. Captured by the British Navy on 4 September 1782, the ship became the model for the British Leda class frigates. These ships were armed with 26 long 18-pounder guns (later increased to 28), 12 long 8-pounder guns and 4 36-pounder obusiers, and had a designated crew of 300. The Proserpine was a 38-gun Hb-class frigate of the French Navy launched in 1785. She was captured by HMS Dryad on 13 June 1796, after a 45 minute action 12 leagues off Cape Clear Island. The match was even, but the Proserpine made the fatal error of attempting escape, and she was finally forced to surrender with serious losses. She was commissioned by the British Admiralty into the Royal Navy, becoming the fifth rate HMS Amelia.