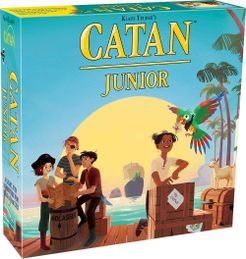 Explore the seas! Catan: Junior introduces a modified playing style of the classic Settlers of Catan, giving players as young as five a perfect introduction to the Catan series of games.

Catan: Junior takes place on a ring of islands where 2 to 4 players build hideouts and encounter the mysterious Spooky Island, where the Ghost Captain lives. Each island generates a specific resource: wood, goats, molasses or swords, and players can acquire gold. Each player starts with two pirate hideouts on different islands, and they can use the resources they acquire to build ships, hideouts or get help from Coco the Parrot. By building ships, they can expand their network; the more hideouts they build, the more resources they may receive. Just watch out for the dreaded Ghost Captain!

Be the first player to control seven pirate hideouts, and you win!

What sets this apart from the previous Die Siedler von Catan: Junior from 2007:


As in Die Siedler von Catan: Junior you can't chain ships; you must build a pirate lair before continuing on.