Board Games > Pirates > Sail Away 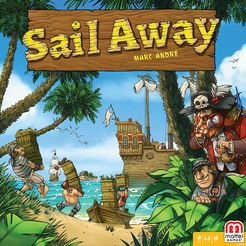 In Sail Away, the players are a gang of Caribbean merchants of questionable repute who are racing to load their ships with goods from the local islands, then ship them out — all the while hiring pirates and using any means necessary to get ahead of the competition.

The object of the game is to earn the most points by launching ships, collecting gold, and completing objectives. Players take turns placing crates on resource-producing islands. When all the spaces on an island are full, all players with crates on that island transfer those crates to their ships. Once you have filled a ship with the required resources, you can launch it. The launched ship provides points as well as unlocking various single-use abilities.

Players can also place pirate crates. Pirate crates can be used to muscle in on your opponents' resources as well as activate dastardly pirate actions such as stealing resources or earning a fee each time a ship is launched.

The game ends when a player has launched five ships. Players earn bonus points for completing public and secret objectives. The player with the most points wins.