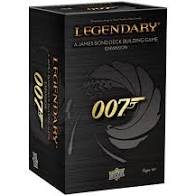 Legendary: A James Bond Deck Building Game Expansion introduces two more classic Bond films — On Her Majesty's Secret Service and Licence To Kill — to the base game. You will face a challenging mix of villains and missions from the movies as you are tasked with defeating the evil mastermind before they are able to complete their evil scheme. The cards in this expansion closely follow the storylines of these two Bond films. Just like the core set, you must defeat the villains before they can escape and complete the missions or before the danger level rises too high. Like Bond, you must be ready because you can count on a few unexpected twists along the way.

This expansion comes with 300 playable cards featuring images from the Bond movies. The game features James Bond as played by George Lazenby, and Timothy Dalton. Of course no Bond game would be complete without Bond's allies like Q, Moneypenny, Felix Leiter, and others. And how could we forget those fabulous Q Branch gadgets! Battle the bad intentions of infamous masterminds like the diabolical Ernst Stravro Blofeld and the ruthless Franz Sanchez. Will you be able to thwart Blofeld's Angels of Death? Can you destroy the power and influence of Sanchez's illicit empire?