Professor Evil and the Citadel of Time 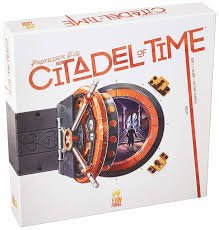 Professor Evil owns a time machine, and he's been ripping off all the best historical items from times both past and future. Your team has been charged with confiscating these items and returning them to their proper locations in time, so you now need to infiltrate the mansion and abscond with four items before Prof. Evil can secrete four of them in locations inaccessible to you. Thankfully the old soul is a bit daft and won't evaporate you should he catch you lurking through the mansion, but simply scoot you out the front door where he'll forget about you immediately.

On a turn, you first draw and reveal two cards from your tiny deck, then keep one of the cards based on what you think will help you this turn. You then take three actions, such as open a door in the room you're in, move from a room (or outside) to another room (assuming the door is open), disable a trap, or grab a treasure; using a card isn't an action unless it says otherwise. You can repeat actions as desired or needed, but you can't enter a room with Prof. Evil and you can't exit the house on your own (in order to run across the grounds to another window) once you enter. You're now committed to grabbing those treasures!

After you finish your turn, Prof. Evil now moves, but again he's not all there, so he doesn't necessarily move in a logical manner. To move him, you roll three dice: One die advances the secondary Prof. Evil figure on the clock on the board either five or ten minutes; the other two determine where Prof. Evil moves and how far. What's more, as he walks through rooms, he closes the doors through which he travels and reactivates any inactive traps he encounters. If you roll a blue and a 1, for example, he moves through the blue doorway into the next adjacent room; a red and a 3 will move him through three rooms, walking through the red doorway each time. A color and a particular signal will teleport him immediately to the treasure bearing the same colored marker.

Let's look at these treasures in more detail: Each treasure shows a time value and one or more traps on it. Three treasures are placed on the board, then a blue, red and green token are placed on the treasures, with a matching blue, red and green token placed on the game board clock on the time matching what's on the treasure. The Magna Carta might say 45 minutes, for example, and after placing a blue token on the Magna Carta, you place a blue token on the clock 45 minutes away from where the Prof. Evil figure is located. If Prof. Evil moves onto this token on the clock, then that treasure is lost — and if you lose four treasures, then you've lost the game. Remove it from play and replace it with a new treasure, marking the proper time on the clock.

Note that you can't just grab a treasure, however. Professor Evil can't be in the same room (of course), but you also must ensure that all the traps shown on the treasure are currently deactivated. The game board starts with eight traps on it — half active, half not — and you'll play tug-of-war with Professor Evil over keeping them in this status. Collect a treasure, and a new one will be added to the game board; collect four treasures before Prof. Evil does, and you all win Professor Evil and The Citadel of Time.