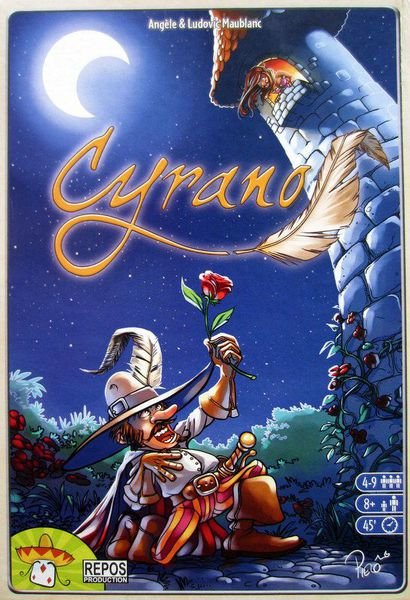 While Cyrano de Bergerac was a real person, Cyrano is based on the play Cyrano de Bergerac, written more than two hundred years after Cyrano’s death. In both the play and the game, Cyrano writes poetry to woo a woman for another man. The game Cyrano lasts a number of rounds, and each round starts with a player revealing a theme card and two rhyme cards ("-aid", "-ed" and so on with homonyms being acceptable). Each player then composes a quatrain (a poem of four lines) with two of the lines ending with one of the rhymes and the other two ending with the other rhyme. Players read their poems and score points Boggle-style, with each unique ending word being worth one point; these points are recorded by blacking out squares on a ladder, which represents the lover’s climb toward his object of affection.

Everyone then secretly votes on which poem he or she most appreciated, whether for its beauty, adherence to theme, or some other artistic qualification. Players reveal their votes simultaneously, and for each player who voted the same way you did, you receive one point, with these points being recorded by the maiden’s descent from the tower. Whichever player first brings the loves onto the same floor of the tower wins, with ties being broken by a rhyming duel.