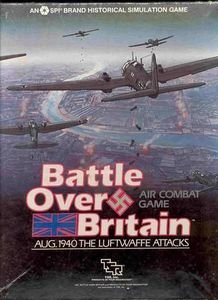 Battle Over Britain: Battle of Britain at operational level. Basic game and advanced game. Turns equal 1 day. German player plan raids for the day and the Brits respond as the raids are detected.

Interception and air to air combat takes place. This is followed by bombing damage to targets. Rules include target priority according to success of earlier raids. Brits have option of transferring squadrons to quiet sectors and vice versa.

Victory is determined by damage to targets and planes shot down. Variable end of game ensure players do not go all out at the "last turn".