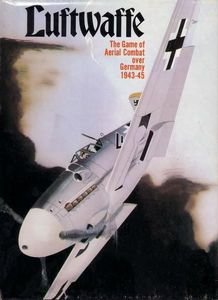 The game of Aerial Combat over Germany 1943-45". A turn based hex and counter wargame covering the strategic air war over Germany in WWII. Turns are roughly 20 minutes. Units are groups of aircraft. Hex size represents 20 miles. The board covers Central Europe including Germany, Austria and Czechoslovakia and sections of Poland, The Netherlands, and Hungary. In the campaign game, missions are at three month intervals from January 1943 to April 1945.