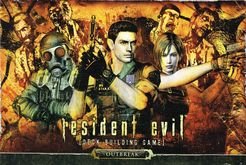 Resident Evil DBG: Outbreak is an expansion set. It presents the Outbreak Mode, that puts the players in danger of turning into the Infected themselves. New characters such as Kevin, Ryman, David King and Mark Wilkins will help you while you’re alive. However, life doesn’t end as an Infected as you can rise from the dead and attack your fellow players as new Infected Characters and Infection Cards!