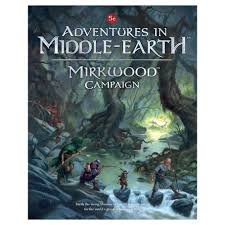 The Necromancer may have been cast out of Dol Guldur, but a lingering darkness remains over Mirkwood, a shadow that will grow ever longer as the years draw on – unless a fellowship of heroes step forward and hold back the gloom.

The Mirkwood Campaign for Adventures in Middle-earth includes enough adventure material to keep you playing for months or even years, and includes new rules that give your heroes a real stake in what happens to the world around them.

The Mirkwood Campaign provides unique campaign framework penned by Gareth Ryder-Hanrahan and Francesco Nepitello for The One Ring Roleplaying Game, converted to Adventures in Middle-earth by Jacob Rodgers.

Visit the Parliament of Spiders, do battle with the Nazgûl, meddle in the affairs of Wizards and enter the Halls of King Thranduil. Stand firm against the Shadow and maybe the Darkening can be averted. Falter for even a moment and all that you know and love will be lost.

What is the Mirkwood Campaign?
The Mirkwood Campaign began life as The Darkening of Mirkwood for The One Ring. We’ve now converted it to be fully compatible with Adventures in Middle-earth, using the 5th Edition OGL ruleset. It’s a campaign framework that guides your game through 30 years of in-game adventures.

The Mirkwood Campaign covers 30 years from Gollum first passing through Mirkwood in 2947 to the sad death of King Bard.

The supplement breaks these decades into four sections and then further details each year, giving you the major events that happen in an unfolding story. These events cover both the wider world with its unfolding epic as the events of Lord of the Rings draw ever closer, as well as the more personal fate of the Woodmen and the rise of Dol Guldur, into which events the Player-heroes are thrust.

In each year there are suggestions for what your Company might chose to do, and loads of advice on what’s happening around Wilderland at the time. There are locations to explore, NPCs to meet, and a detailed suggested adventure for every Adventuring Phase.

Written by award-winning writers Gareth Ryder-Hanrahan with Francesco Nepitello, and expertly converted by Jacob Rodgers, the Mirkwood Campaign is an absolute treasure trove of material for any Loremaster – even if you don’t want to run the whole campaign. The supplement is constructed in such a way that you can dip in and out of events year by year, running however much you wish to, and leaving the precise events in your personal Wilderland up to you.

Many One Ring players have woven together Wilderland Adventures and the Mirkwood Campaign to great effect. It’s an incredible suite of gaming material, available to 5e players for the first time.

A Framework
Where Wilderland Adventures provides seven adventures that you can run right out of the box, the Mirkwood Campaign is unapologetic in requiring a little more investment from the Loremaster. It’s a master-crafted framework for you to build on, with the supplement doing the time-consuming and knowledge-intensive work of providing the setting material, NPCs, annual events and accurately tracking the passage of time through the Tale of Years. You’re free to explore your own story through the provided events.

The Mirkwood Campaign is packed with ideas, tools and support for you to run your own campaign in a truly exciting part of Middle-earth history and geography. Just as the setting of Adventures in Middle-earth was carefully chosen to give your players room to be heroes that matter, the Mirkwood Campaign zooms in on the struggles of the Woodmen and the retaking of Dol Guldur as the Shadow rises once more. It is truly the stuff of epics.

Exactly how you run it, and how your Company of Adventurers respond to it, is extremely flexible. It isn’t a rail road. It’s an experience!

We’ve been delighted to read all the actual play reports from One Ring players who’ve completed the One Ring version of the Mirkwood Campaign. Some have spent two years on it. Others have run it twice since it came out, each time offering up entirely different events and conclusions! Many, many more are deep in the struggles against the Nazgul. It’s a marvellous experience and we’re very happy to bring it to Adventures in Middle-earth and 5th Edition.

More
There’s more to the Mirkwood Campaign as a supplement than “just” a 30 year epic. There are rules for personal holdings, so that your characters can own a real stake in the future of Middle-earth. Be they hunting grounds, an inn, or a silver mine, the Mirkwood Campaign gives you the tools to allow your players to develop an even deeper involvement in Wilderland.

There’s also the brand new Shadows in the Forest rules, that weave Journeys into your Player-heroes’ Backgrounds. The Forest can throw up strange memories, and the endless deep green can be a reflective place in which to travel...

The Mirkwood Campaign is a remarkable supplement, providing decades of in-game play.