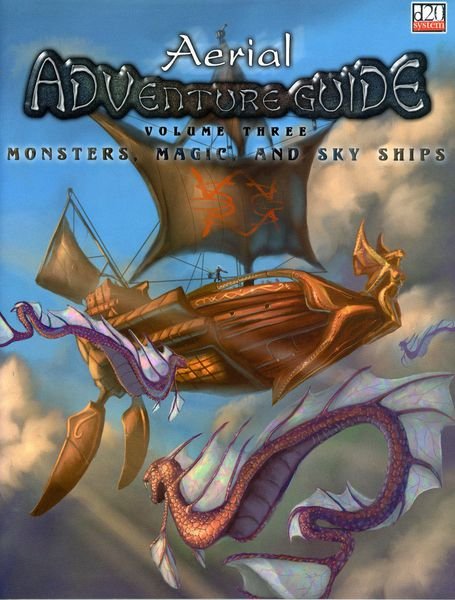 Sky ships, flying castles, cloud cities, and airborne monsters: all of this and more awaits you in the Aerial Adventures Guides. These stand-alone sourcebooks contain new character options, races, monsters, feats, items, and adventure ideas, plus aerial combat rules and sky ship design guidelines. Best of all the aerial adventure guides can be integrated into any fantasy campaign - after all, no matter what worlds sits at ground level, anything can float above.

The series is divided into three volumes. The first covers rules, the second overs settings, and the third covers monsters and items. each of the three volumes can be used separately or they can be combined and used together.

Monsters, Magic, and Sky Ships is the third volume in the Aerial Adventure Guide series. It includes everything needed to populate the sky lanes of your campaign: new magic items and properties, strange new monsters, and a wide selection of flying sky ships. Features:

Volume One, Rulers of the Sky, covers the basics of aerial adventures. Volume Tow, Sellaine: Jewel of the Clouds, describes aerial settings, including the sky elf city of Sellaine.