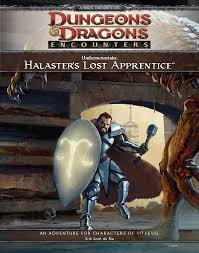 A lost passageway on the upper level of the most infamous dungeon in Faerun has recently been uncovered. When a patron hires a band of adventurers to brave the dangers of Undermountain, a search is on to uncover secrets of an apprentice of the dungeon's lost creator - Halaster.

There is extensive writing in the book!