Search for the Diamond Staff 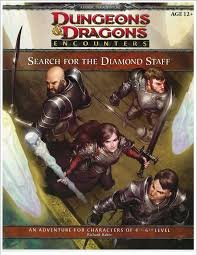 The Diamond Staff of Chomylla, an artifact with the power to unlock the mysteries of an ancient elven civilization, has at long last been found. When orcs steal the staff, though, it's up to a group of heroes to stop them. Why orcs would want the staff is anyone's guess, and the quest to find the truth might well lead the adventurers across the Dalelands and into the depths of the lost library vaults of Uvaeren.

This season also include an optional online component, which allows players and Dungeon Masters to convert the adventure to the D&D Next playtest. Find out more about the playtest at www.dndnext.com.