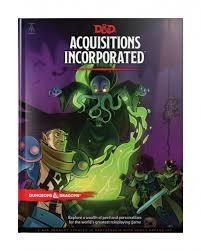 In Stock
Acquisitions Incorporated is a different flavor of Dungeons & Dragons. A fifth edition D&D book created in partnership with Penny Arcade Inc. and inspired by the podcast and web series, this book is full of madcap heists, hilarious moments, and all the ingredients you need to include the adventurers of Acquisitions Incorporated in your own fifth edition D&D campaign.

• Start up your own Acquisitions Incorporated franchise in the Forgotten Realms or anywhere in the multiverse.
• Live out your fantasy of climbing the corporate ladder of the most notorious retrieval agency in the Forgotten Realms—Acquisitions Incorporated.
• The 224-page book will give Dungeon Masters and players plenty of bits to play a D&D fifth edition game just as if you were on stage with the crew at PAX! New backgrounds, character options, franchise information and more.
• You'll also find an adventure that will take characters from levels 1 through 6, establishing your party's claim on a world they've just begun to explore—and to strip-mine for profit.